When someone discloses that she has been sexually assaulted, the way you react is a key factor in helping her recover. The first time she disclosures her experience is an extremely sensitive period for the survivor. Responses that are:

-can reaffirm a survivor’s positive sense of self during this fragile time.

Survivors that receive supportive responses are less likely to experience depression and PTSD, and more likely to heal with less complications and experience positive traumatic growth.

Sexual assault is a serious trauma that can impact the survivor’s life in multiple negative ways. This is just a partial list.

A rape can have a profound impact a survivor’s entire life.

Negative responses such as victim-blaming and shaming can retraumatize the survivor by increasing:

When rape survivors are blamed for what was done to them, it is sometimes called the “second rape.”

Studies showed that rape survivors who blamed themselves for the assault exhibited more PTSD symptoms.

One of the most important jobs of a therapist, friends and family is to help the victim stop blaming herself.

Toxic self-blame magnifies the trauma. “Irrational self-blame specific to a traumatic event is an act of violence against an innocent self,” explains researcher Katherine Unthank (2007). She calls it “shame’s momentary lethal impact on the self” (p. iii).

Victim-blaming holds the survivor responsible for the crimes against her even when there is no logical reason to do so. It includes demeaning the character of the survivor to appear less innocent, and therefore more blameworthy. When a survivor’s traumatic experience is disregarded, minimized, or discredited, the feelings of the survivor can “closely mimic the victim’s experience at the hands of her assailant” (Campbell & Raja, 1999, p. 142).

Victim-blaming is most likely to occur when the survivor does not meet the definition of the “ideal victim” (Meyer, 2016). Ideal victims are those who were behaving in morally acceptable ways when victimized, who are perceived as weak, shy, innocent, vulnerable (like children), and who were victimized by a stranger with whom the victim had no prior relationship (Christie, 1986). The ideal victim myth undermines the reputation and credibility of individuals who are outside the boundaries of the ideal victim stereotype. Very few victims are actually ideal victims.

Why do people blame the victim?

Belief in a Just World

A researcher named Bevens (2016) explains that observers demean victims, even those that are most deserving of sympathy, in order to bring about a more appropriate match between the victim’s character and her fate. This makes the world seem more just, because it is frightening to imagine that a victim did nothing wrong, and yet was still victimized. What does this mean for our own safety? Belief in a just world helps people distance themselves from the suffering of others. In a just world, people get what they deserve (Lerner, 1980). This helps people feel assured that a similar fate would never happen to them.

Interestingly, psychological distancing happens more often when the victims are not very different from the observers. Goldenberg and Forgas (2012) found that victim-blaming was more likely to take place among in-group members with whom the viewers had the most similarities.

The fundamental attribution error refers to the tendency for people to attribute, or blame, the victimization of others to their personal characteristics rather than to the external circumstances (Hooper et al., 2015; L. Ross, 1977).

Differentiating victims (i.e., describing them as unwise, gullible, weak, idiotic, too trusting, asking for it) helps the observers believe that victims deserved their suffering due to their character flaws. They minimize the most important factor in a rape: the actions of the rapist. No matter what a rape victim did, whether she was wearing something sexy, drinking, out too late, or agreeing to a romantic evening, no still means no. Having one’s free will overcome by a rapist is never due to the character flaws of the victim, and always due to the abusive, violating actions of the perpetrator.

A Note About Date Rape

How to respond when someone discloses a sexual assault

Be aware that some people may find themselves flooded with emotions. If they are getting increasingly upset while telling you about what happened, they may be reliving the experience. There are several ways you can help to ground them if they are overwhelmed:

Common mistakes when someone discloses a sexual assault: 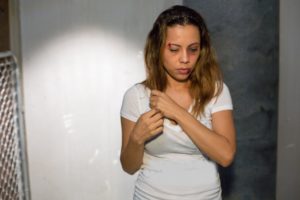